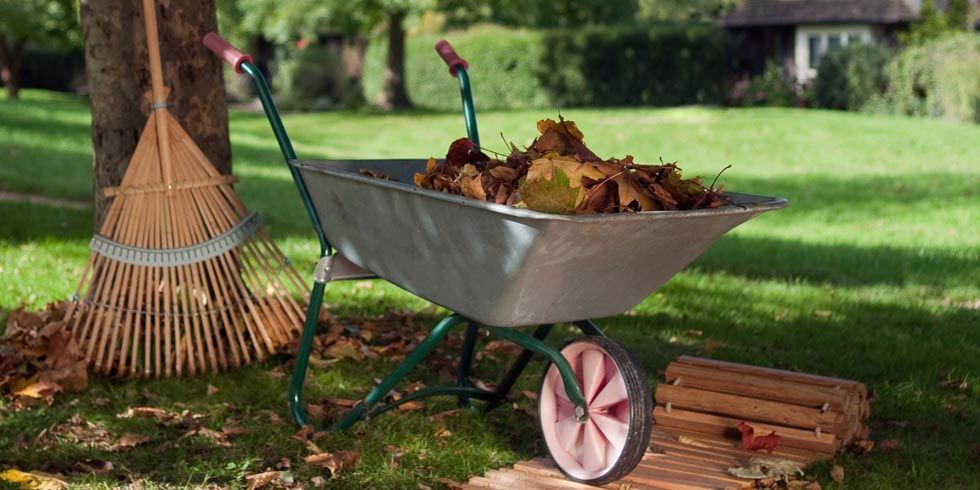 Fall is one of the best times to improve your lawn, trees, shrubs, and garden. The basic maintenance you do during this “second spring” after summer will pay off in healthier growth and fewer problems next spring and summer. And because soils are still warm despite the falling temperatures, the weeks ahead are an ideal time to put many plants into the ground, no matter where you live.

We’ve broken down the work you’ll be doing now through the end of fall by areas of the yard. Inside each section, tasks are listed by importance.

Fall fertilizing helps keep lawns vigorous and healthy where growing seasons are long and reduces the length of a dormant period during which the lawn is an unattractive brown. We recommend two applications—the first soon after Labor Day, the second around the last time you mow for the year.

Choose the right fertilizer: Nitrogen is the nutrient lawns need most, and most lawn fertilizers contain plenty of it. In northern regions, where lawns become dormant, choose a quick-release ammoniacal or urea nitrogen for late fall. In southern and western areas, where lawns grow through the winter, use a controlled-release fertilizer or one that is high in water-insoluble nitrogen. Fertilizer labels include that information as well as the percentage by weight of nitrogen (N), phosphorus (P), and potassium (K), in that order. Apply either kind at the rate of 1 to 1 1/2 pounds of nitrogen per thousand square feet. A 100-pound bag of 20-0-0 fertilizer contains 20 pounds of nitrogen.

Broad-leaf weeds, such as dandelions, broad-leaf plantain, and ground ivy, can be pulled out by hand anytime. But autumn is when they’re most vulnerable to weed killers.

Do it every week or so until grass has stopped growing. For lawns under or near deciduous trees, using your mower’s mulching mode—in which discharge chutes are closed off so that the grass and leaves can be chopped more finely—also allows leaves to decompose on your lawn without being smothering Most newer rotary mowers and lawn tractors have a mulching mode. If yours doesn’t, remove leaves by raking them up for bagging or composting.

Fall and winter are also good times to lay seed so that your lawn gets a head start in the spring.

Dethatch or aerate, or do both

Dethatching involves pulling vertically oriented tines through the turf; aerating involves extracting small cores of soil. Both reduce thatch, a layer of dead grass stems and roots (not clippings) that build up faster than they can decompose, accumulating on top of the soil layer and reducing water penetration to the roots.

Powered aerators have either curved steel coring tubes mounted on a drum or straight coring tubes on a shaft that pushes them vertically into the soil. As with powered dethatching machines, you can rent aerators for about $60 per day.

A soil test is the only way to determine the pH and nutrient needs of your lawn. Spread ground-up or dolomitic limestone (granular is easiest to handle) or soil sulfur if the results of a soil test indicate one or the other is needed.

If rains have been spare recently, apply plenty of water, even if temperatures are cool. Lawns that enter winter stressed from drought are likelier to be damaged by cold weather and emerge weaker in the spring. Watering is especially important in mountainous western regions of the U.S., where dry falls are typically followed by cold winters.

For cooler regions, planting now through the end of October gives most plants a head start in the spring, since roots will grow in still-warm soil long after air temperatures drop. Where winters are mild, the fall planting season extends into winter. Be sure to soak the root ball thoroughly at least weekly if the weather is dry in your area. In the frigid North, apply mulch after the soil freezes to prevent the soil around plants from thawing and refreezing, which can damage tender new roots.

Keep mice, moles, and other rodents from feeding on the bark of young trees in winter by wrapping a cylinder of 1/2-inch-mesh hardware cloth around the trunk. Leave at least 1 inch between the mesh and trunk, and push the mesh 3 inches into the soil. Plastic wraps that extend 2 feet above the snow line protect the trunk from rabbits. Remove the mesh in spring.

Boxwood, holly, and rhododendrons often suffer in winter because their leaves lose moisture, or transpire, on sunny days without replacing it from the soil when it’s frozen.

What to do: Surround these plants with a shelter of burlap or old sheets. Drive three to five narrow stakes around the plant and pull the material taut over them so that it doesn’t rest on leaves or branches; secure in place with staples. The material creates shade and slows wind, both of which serve to reduce transpiration.

Provide additional protection by using an anti-transpirant spray on the foliage after the first hard frost. The spray will dry into a thin film that reduces the moisture lost by transpiration.

Soak soil around trees and shrubs if rainfall has been light to ensure that plants enter winter fully hydrated.

Fall is the time to plant crocus, daffodils, hyacinths, tulips, and other spring-flowering bulbs throughout most of the country.

You should be able to find superior varieties for your region at local nurseries or in mail-order garden catalogs. Separate individual cloves from the mother bulb and plant them outdoors in good garden soil 1 to 2 inches deep and about 4 inches apart.

Where mild winters permit, these include plants such as cabbage, kale, pansies, primroses, and violas. In southern and coastal regions, many annuals can begin blooming by mid-December and continue until spring. Planting later will probably sacrifice winter bloom but should still provide flowers earlier in spring.

Most modern hybrid roses (hybrid teas, floribunda, and grandifloras) are damaged by temperatures below 10 F or so. If those temperatures are common where you live, mound soil over the plant’s central crown or bud, called the bud union (this node at the base of the plant is the spot from which new canes emerge). Also wrap stems with a wire or mesh cylinder filled with a light mulch such as composted bark.

Cut back and divide perennials

Cut back dead leaves and stems of perennials. In the mild-winter South and West, fill in the empty space with cool-season annuals such as forget-me-not, sweet alyssum, and violas. Leave those with attractive, dried stems for winter interest. Divide some perennials, including Oriental poppies, peonies, and Siberian irises, if they’re overcrowded and if there is still usually about a month until the hard frost.

How to divide: Lift the root entire root mass, then use a spading fork or small shovel to separate individual clumps. Cut back any remaining leaves to a length of 2 or 3 inches. Replant the most vigorous clumps, and discard those that are weak or diseased.

In northern areas, dig and store tender bulbs such as tuberous begonias, dahlias, and gladiolus.

What to do: Once begonia leaves dry and fade, lift the tuber, shake off soil, and store in a cool place. To store dahlias, dig up the sweet-potato-like tuberous root and cut off stems about 4 inches above them after the first frost. Shake off loose soil and allow to dry in the sun for most of a day. Store in dry sawdust or peat moss in a cool location. Dry gladiolus corms in a well-ventilated, cool, and dark location for three weeks before storing.

If you use selective herbicides on your lawn, it’s important to ensure that weeds, not desirable plants, receive the right dose at the right time. Herbicides can reach the wrong plant in a number of ways, most obviously by misdirected spray. Wind can also carry droplets to nearby plants, and sunlight can actually cause volatile products to drift about on warm days.

No matter the chemical you’re using, review and follow all label directions and cautions. Here are some usage tips for specific types of herbicides:

These herbicides are intended to be used only with a drop spreader.

These products are designed to use in both hose-end and tank-type sprayers, but we strongly recommend the latter for their more accurate dilution and application.

Herbicides are classified according to their use or mode of action:

Non-selective herbicides like Roundup kill all kinds of plants.

Selective herbicides like Ortho Weed-B-Gon Max Weed Killer for Lawns Concentrate kill some plants but not others, when applied as directed. In lawns, selective herbicides kill types of plants that botanists call dicots. These have branching veins in variously shaped leaves and include many common lawn weeds. Monocots, which have parallel veins in typically narrow leaves, include most grasses.

Post-emergent herbicides such as Roundup and Weed-B-Gon kill growing weeds and may be either selective or not.

Pre-emergent herbicides prevent some weed seeds from even germinating. They are typically used in lawns in early spring to prevent crabgrass. Most often these herbicides are combined with a fertilizer, as in Scotts Turf Builder Halts Crabgrass Preventer.

How to calibrate a drop spreader

Often you’ll see an application rate on bags of fertilizer—10 pounds per 1,000 square feet, for example. To ensure proper application, you need to determine how much fertilizer your drop spreader lays down. (If your model of spreader is listed on the fertilizer bag, use that setting.)

Fill the spreader with fertilizer, set the opening to the number indicated on the bag (different spreaders have different settings), and then operate it over 50 feet. You’ll need to collect the fertilizer, so either attach a collection pan under the spreader or run it over a tarp.

Collect the distributed fertilizer and weigh it.

Calculate the square footage covered by multiplying the actual width the holes cover on the spreader (in feet) by 50.

To calculate how much your spreader drops, divide the area covered by the weight collected. A spreader that drops half a pound over 50 square feet, for example, would have an application rate of 1 pound per 100 square feet or 10 pounds per 1,000 square feet. If that is the amount intended, you’ve confirmed that your spreader is accurate. If not, adjust the setting on the dial up or down and repeat until the amount delivered matches the amount recommended.

Fill out this form to get in touch with us!